END_OF_DOCUMENT_TOKEN_TO_BE_REPLACED

NCTE applauds the Transgender Law Center and Tamara Lusardi in obtaining a decision from the U.S. Office of Special Counsel (OSC) found that the Department of the Army engaged in unlawful discrimination of Ms. Tamara Lusardi and ordered corrective action on her behalf.

Ms. Tamara Lusardi is a disabled veteran who transitioned in 2010. She works at the U.S. Army Aviation and Missile Research, Development and Engineering Center (AMRDEC) as a Software Quality Assurance Specialist. After Ms. Lusardi transitioned on the job, her supervisor would purposely mis-gender her and would repeatedly refer to her as “sir” and “he.” Furthermore Ms. Lusardi was asked to agree that she could only use a single-use restroom and not use the same restrooms as other female employees.

U.S. Office of Special Counsel (OSC) found that the mis-gendering by her supervisor and the restrictions put on Ms. Lusardi constituted unlawful discrimination based on a factor unrelated to job performance, in violation of federal civil service law. OSC said that these action likely also violated Title VII, the law against sex discrimination in the workplace. The Department of the Army has agreed to provide LGBT sensitivity training to employees and supervisors at the AMRDEC facility.

Today’s action by OSC is one more milestone showing that not only that transgender workers have recourse against discrimination, but that recourse extends to practices that deny an employee’s gender identity and make it impossible to come to work as who they are.

NCTE is currently working with the US Equal Employment Opportunity Commission (EEOC), the Department of Labor, and other agencies to strengthen workplace protections for trans people.

Federal employees, and anyone else facing discrimination at work, should consult NCTE’s “Transgender Federal Workers: Your Workplace Rights” resource to find out how to file a complaint and get legal help.

Today, the Department of Labor (DOL) sent guidance to the 200,000 federal contractors saying they may not discriminate against transgender workers. They clarified that that sex discrimination laws extend to individuals discriminated against based on their gender identity or “transgender status” and that this will be in force even before the President’s Executive order adding “gender identity” protections is fully implemented. DOL’s Office of Federal Contract Compliance Programs will oversee compliance with these newest guidelines.

In June, Secretary of Labor Tom Perez announced that DOL is also in the process of updating enforcement protocols and anti-discrimination guidance to protect transgender workers in other areas over which the Department of Labor has jurisdiction.

“Today’s latest victory means that almost every major federal civil rights agency agrees that federal sex discrimination laws protect transgender people in the areas of employment, housing, health care, and education,” said NCTE Executive Director Mara Keisling. “While President Obama’s executive order will take effect once implementing rules are issued in 2015, today’s DOL announcement makes it unmistakable that individuals who are discriminated based on their gender identity in the workplace by a federal contractor can file discrimination complaints immediately with the Department of Labor,” said Keisling.

For information on filing complaints with the Department, please refer to NCTE’s resource “Transgender Federal Workers: Your Workplace Rights.” As always, if you have been discriminated against by any employer, please refer to our “Employment Discrimination and Transgender People” resource.

Though specifically focused on the federal workforce, the rules are another indication of the increasingly solid legal consensus that all banning sex discrimination necessarily ban anti-trans bias. The Department of Education recently issued similar guidance under the federal Title IX law, and the Department of Health and Human Services and the Department of Labor have both announced in recent months that they intend to take a similar approach in forthcoming rules or guidance on job and health care discrimination.

NCTE and other advocates are pressing all of these agencies to provide more detailed guidance on how sex discrimination protect trans people in common situations in schools, workplaces and health care settings.​

Learn more about the workplace rights of federal workers here. 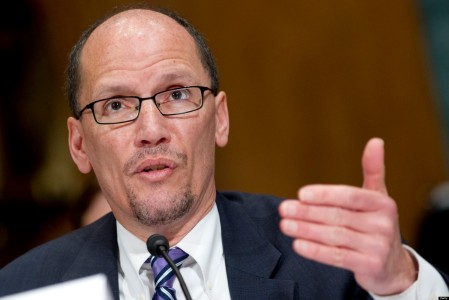 In a statement to the Washington Blade, NCTE Executive Director Mara Keisling said, “With the impending signing of the President’s two gender identity executive orders, we are very pleased that Secretary Perez agrees with us on the need to publicly clarify the law that the Department enforces.”

END_OF_DOCUMENT_TOKEN_TO_BE_REPLACED

The federal government will begin letting insurance companies who have Federal Employee Health Benefits (FEHB) plans consider trans health care needs just like other types of medical care.  They will no longer require the insurance carriers to have a blanket exclusion for trans-related care. This is a significant win for trans federal employees who have long faced discrimination from the FEHB plans.

NCTE Executive Director Mara Keisling said, “Fixing the FEHB plans have been a priority for us for years.  First of all, it was a priority because transgender federal employees need healthcare, but also, this was one of the few remaining areas where the federal government was the actual discriminator, giving trans employees lesser benefits than non-trans employees. “

NCTE commends the Obama Administration and especially the Office of Personnel Management for taking this major step toward modernizing the health benefits to provide needed medical treatments. Though this new policy allows insurance companies to drop the exclusion, they are not yet required to do so; NCTE urges OPM to, with next year’s insurance process, to require all insurance companies to drop the exclusion.

The National Center for Transgender Equality (NCTE) recently trained staff from Job Centers on how to make their services transgender friendly and transgender competent.

What is a Job Center? State and local governments, with U.S. Department of Labor funding, run these Job Centers all over the United States where people can get help with finding and applying for jobs and getting job training, which is often free.  Known sometimes as One-Stop Centers or Career Centers, they are all designed to help people get work. There are nearly 3000 centers throughout the U.S.; you can find one in your area here. 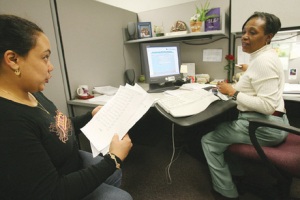 NCTE was invited by the Department of Labor to give a presentation to officials from Job Centers on how to appropriately, respectfully and competently serve transgender job-seekers. Our curriculum included basic transgender terminology and cultural competency, and information about how transgender people are often locked out of the traditional workforce due to discrimination. We covered why trans people may have gaps in employment or education, why many have criminal records from survival work they have done on the streets, and how to work around these issues when trying to assist a transgender job-seeker to get employed.

Though there is much to be done, this training was a great first step with the Job Center system. NCTE has been pushing for Department of Labor to create a clear policy that all Job Centers and their affiliated training programs must not discriminate on the basis of gender identity.

The National Center for Transgender Equality (NCTE) welcomes the news that the City of Philadelphia has finally settled a federal anti-bias lawsuit brought by city library worker Bobbie Burnett. Ms. Burnett was subjected to years of workplace harassment and other discrimination after she transitioned on the job in 2002. Managers allegedly restricted her use of women’s restrooms on the job, gave her undesirable job assignments, limited her contact with the public, and disciplined her for frivolous reasons.

Last month, the U.S. Department of Justice (DOJ) filed a brief in federal district court supporting Ms. Burnett’s case and arguing that Title VII of the Civil Rights Act of 1964 prohibits discrimination based on transgender status or gender transition. This filing is the latest signal that Federal Justice officials are taking the same position as the Departments of Education, Housing and Urban Development, and Health and Human Services, and the US Equal Employment Opportunity Commission: that federal sex discrimination laws protect transgender people.