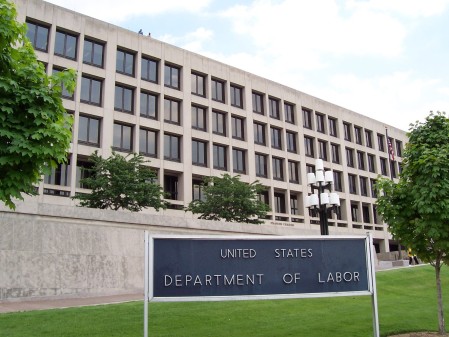 END_OF_DOCUMENT_TOKEN_TO_BE_REPLACED

A first complaint was filed in Michigan on behalf of Amiee Stephens against her former employer R.G. & G.R. Harris Funeral Home, Inc. The EEOC alleges that soon after Ms. Stephens came out at work about her gender transition she was fired for no other reason than for her being transgender.

The second case was filed in Florida on behalf of Brandi Branson against her former employer Lakeland Eye Clinic. The EEOC alleges that following her transition from male to female at work, she was ostracized on the job and the eye doctors that she worked with stopped referring patients to her. Later Branson was let go with the reason stated that her position was being eliminated entirely. Around two months later, however, a replacement was hired. In Branson’s original EEOC complaint she is represented by trans attorney Jillian Weiss.

END_OF_DOCUMENT_TOKEN_TO_BE_REPLACED

Today, the Department of Labor (DOL) sent guidance to the 200,000 federal contractors saying they may not discriminate against transgender workers. They clarified that that sex discrimination laws extend to individuals discriminated against based on their gender identity or “transgender status” and that this will be in force even before the President’s Executive order adding “gender identity” protections is fully implemented. DOL’s Office of Federal Contract Compliance Programs will oversee compliance with these newest guidelines.

In June, Secretary of Labor Tom Perez announced that DOL is also in the process of updating enforcement protocols and anti-discrimination guidance to protect transgender workers in other areas over which the Department of Labor has jurisdiction.

“Today’s latest victory means that almost every major federal civil rights agency agrees that federal sex discrimination laws protect transgender people in the areas of employment, housing, health care, and education,” said NCTE Executive Director Mara Keisling. “While President Obama’s executive order will take effect once implementing rules are issued in 2015, today’s DOL announcement makes it unmistakable that individuals who are discriminated based on their gender identity in the workplace by a federal contractor can file discrimination complaints immediately with the Department of Labor,” said Keisling.

For information on filing complaints with the Department, please refer to NCTE’s resource “Transgender Federal Workers: Your Workplace Rights.” As always, if you have been discriminated against by any employer, please refer to our “Employment Discrimination and Transgender People” resource.

Houston, TX  Mayor Annise Parker held a press conference today to announce that a petition effort to repeal the Houston Equal Rights Ordinance (HERO) has failed to gather the required amount of signatures. This victory comes after a similar victory earlier this year in Maryland, where opponents of the Fairness for All Marylanders Act also failed to gather enough signatures for a repeal effort of this statewide bill.

Assuming any court appeal fails, Houston will no longer be the largest U.S. city without explicit anti-discrimination protections for transgender people. The National Center for Transgender Equality congratulates local Houston advocates and celebrates this string of victories. People’s basic rights against discrimination should never be put up for a public vote. NCTE will continue to press for nationwide protections for transgender people.

Though specifically focused on the federal workforce, the rules are another indication of the increasingly solid legal consensus that all banning sex discrimination necessarily ban anti-trans bias. The Department of Education recently issued similar guidance under the federal Title IX law, and the Department of Health and Human Services and the Department of Labor have both announced in recent months that they intend to take a similar approach in forthcoming rules or guidance on job and health care discrimination.

NCTE and other advocates are pressing all of these agencies to provide more detailed guidance on how sex discrimination protect trans people in common situations in schools, workplaces and health care settings.​

Learn more about the workplace rights of federal workers here.

Last week, the United States Department of Agriculture (USDA) released an updated version of the nondiscrimination regulations that guide their programs and activities. There were three important changes made to the existing regulations that include: an agency requirement to collect inform on race, ethnicity, and gender for all of its applicants and participants of programs, the establishment of Alternative Dispute Resolution (ADR) services, and the establishment of explicit protection on the basis of political beliefs and gender identity.

NCTE welcomes the explicit nondiscrimination protection on the basis of gender identity USDA operated programs and activities. This added protection sets a clear standards for USDA offices and programs in every state in the nation, and gives customers who believe that they have been discriminated against due to their gender identity a basis upon which to file an administrative complaint. Due to continuing, widespread bias and discrimination, transgender people today face disproportionate levels of poverty, unemployment, homelessness, and victimization. According to the National Transgender Discrimination Survey, nearly one-third of transgender people report having experienced discrimination in a government office or program on at least one occasion. At present, many of the states with large rural communities served by USDA programs are the same states in which there is no explicit statewide nondiscrimination protection, and in which it is most difficult for transgender people to update state-issued identification.

END_OF_DOCUMENT_TOKEN_TO_BE_REPLACED

ay, as Exxon Mobil’s shareholders vote again to deny workplace protections to its lesbian, gay, bisexual, and transgender (LGBT) employees, and the city of Houston, Texas votes on whether to extend such protections to LGBT workers, a newly released report paints a sobering portrait of widespread discrimination faced by LGBT people in the workplace. A Broken Bargain: Unchecked Discrimination Against LGBT Workers documents how LGBT workers continue to face unfair treatment, harassment, and discrimination, yet no federal law provides explicit legal protections.

Join us as we lobby for passage of federal legislation that explicitly bans workplace discrimination against transgender and LGBT Americans.

LGBT workers face discrimination that makes it harder for them to find and keep good jobs, earn a living, and provide for themselves and their families. This discrimination includes: