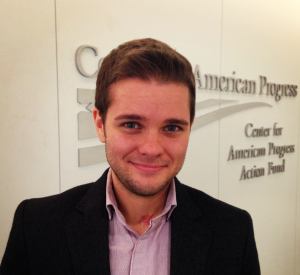 Andy Cray came to work at the National Center for Transgender Equality (NCTE) as a law fellow right out of law school. Coming from one of the handful of best law schools in the country, he really could have gone anywhere, but he wanted to work for the transgender community and he wanted to do it at NCTE. An even smaller organization at the time than we are now, we were unable to pay Andy; so he even brought his own funding from his law school. Less than a year later he found a permanent, full-time position doing trans health advocacy at the Center for American Progress (CAP). We continued to work with him, for which I will always be amazed, but less than two years later, after accomplishing a body of work that any activist would be proud of, Andy passed away this August from cancer, leaving behind an improbably large group of devastated but amazed family, friends and admirers—people who really were touched deeply by Andy.

In honor of that body of work, NCTE is so proud to announce our new Andrew Cray Law Fellowships. The NCTE Board of Directors has also initiated an annual recognition called the Andrew Cray Trans Health Advocacy Award, which we will give each year at our anniversary event to an activist who significantly advances trans health.

Andrew Cray was such a significant part of the rapidly advancing transgender health movement. He was a key player in the recent success in eliminating insurance exclusions for transition-related care through state insurance commission rulings. His work to get transgender and other LGBT people enrolled in Affordable Care Act plans caused President Obama to name Andy as a Champion of Change.

We know how lucky we are to have known and worked with such a beautiful and brilliant star, and we know too we are lucky for our exposure to everyone of the law fellows who has and will pitch in over the years. So, having future law fellows be called Andrew Cray Law Fellows just felt like a match about which Andy would have been pleased and honored and a bit embarrassed.

END_OF_DOCUMENT_TOKEN_TO_BE_REPLACED

Transgender people cannot currently serve openly in the U.S. Military. Military medical regulations, as currently written and implemented, effectively preclude service. These rules are based on unsupportable, old fashioned, unscientific nothing and they must end. And they will end.

Finally, nearly three years after Don’t Ask Don’t Tell was repealed, attention is finally turning to trans military service. Just this week, our colleagues at The Palm Center announced that they have commissioned eleven studies, supported by the largest known grant ever given to a trans policy effort. And yesterday, The Williams Institute released a new analysis of the challenges reported by veterans in the NCTE/Task Force National Transgender Discrimination Survey (NTDS).

Even more is happening behind the scenes. Conversations are starting, plans are being laid, and progress seems inevitable. We will win open military service for trans people.

END_OF_DOCUMENT_TOKEN_TO_BE_REPLACED

Thanks from my heart go to everyone who has worked at NCTE, served on the Board, supported us financially, worked with us from an allied organization or as an individual, and anyone anywhere who has just pitched-in on their own to improve trans lives.

I have been in service to transgender people for a decade in this role, and I could not be more honored and happy, humbled and proud.

Thank you. And wait until you see what we get done this year.

Why NCTE Cares About the Prison Rape Elimination Act Standards

If you have seen NCTE’s Blueprint for Equality, you know that the federal agenda we’re working on is both complex and comprehensive. Every issue on the agenda is important. Some of the issues are truly life saving, while others are simply necessary steps to full equality. All of it is important to some trans people who are facing obstacles to living fully. And one of these issues I’m really proud of working on is the National Standards to Prevent, Detect and Respond to Prison Rape.

In 2003, the Prison Rape Elimination Act (PREA) was passed by Congress and signed by President Bush. The Republican Senate, the Republican House and the Republican President all agreed that, regardless of various positions on corrections and crimes and related issues, in the United States we all agree that sexual assault in prison is unacceptable and must be stopped. A Congressionally appointed commission and the U.S. Department of Justice spent nearly a decade studying the issue and developing national standards to address all aspects of the problem. And NCTE has provided input all along the way.

And very soon—hopefully within weeks—the U.S. Department of Justice will release standards that could help significantly decrease rape in prison. We have not yet seen the final standards, but we are hopeful that our advocacy has influenced them in terms of how trans people are classified housed and searched among other things.

END_OF_DOCUMENT_TOKEN_TO_BE_REPLACED

Trans Health Care Protections at Risk with the Supreme Court

Yesterday kicked off National LGBT Health Awareness Week, a time when, as Secretary of Health and Human Services Kathleen Sebelius said in a statement, we “highlight the progress our country is making to address the unique health needs of lesbian, gay, bisexual, and transgender (LGBT) Americans, especially through the implementation of the health care law, the Affordable Care Act.”

But recently, instead of highlighting progress, we are being forced to defend victories. For instance, the attack on women’s reproductive health and the constant war on “Obamacare” symbolize for me how extremists are taking distinctly anti-equality positions. And today, even more is at risk as the U.S. Supreme Court hears arguments related to the constitutionality of the Affordable Care Act.

END_OF_DOCUMENT_TOKEN_TO_BE_REPLACED 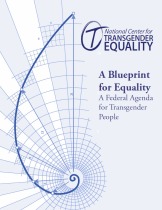 If you asked me what I would most like people to know about the National Center for Transgender Equality, I’d need to name a few things: we have a truly remarkable board and staff, we do exceptional work with almost no resources, and our federal agenda is really, really complex. I hope that the quality of our board, staff, and work shows.  However, I do sometimes think that the community doesn’t always see the breadth and complexity of the work we do.

In late 2007, when we knew that a new Presidential administration was imminent, we began a process to really dig into and understand all the federal policies that needed to be adjusted to be fairer for trans people. Most bad policies weren’t intentionally hurtful to us; they just ignored us or didn’t anticipate us.

Late in 2008, we released a list of policies we wanted changed and we set about changing them. Since then, we’ve had some very important successes like working with the State Department to update their passport gender marker rules and working with the Social Security Administration to get them to stop sending gender no-match letters that effectively out trans people to employers.  We’ve also had dozens of other successes, big and small.

END_OF_DOCUMENT_TOKEN_TO_BE_REPLACED

Unquestionably, the most solemn day for transgender people in the U.S. is the Transgender Day of Remembrance which is commemorated every November 20, throughout the United State and worldwide. On this day, we memorialize the many transgender people who have lost their lives to hate-based violence. It has been estimated that one trans person per month on average is killed in the United States in a hate crime murder just for being transgender.

Most people I suppose have no idea that transgender people in the United States face obscenely elevated levels of violence compared to non-transgender Americans. The epidemic of school bullying against lesbian, gay, bisexual and transgender students has received much needed attention lately. That’s great and helping our children should be a priority. But we also face higher rates of sexual assaults, domestic violence, assault by police and hate violence—attacks and frequently murder just because of who we are.

The recent National Transgender Discrimination Survey showed that 26 percent of trans people in our sample had faced physical attack at some point for being transgender and ten percent experienced sexual assault. In Washington, DC alone there have been 25 anti-transgender attacks, including two murders, reported to the police just since July, according to the DC Trans Coalition.

All this violence is a well-known, deeply felt and, too often, personally experienced reality for the transgender people in your life—your trans children, coworkers and neighbors.

Violence against trans people is such a public health and safety issue that it is finally getting attention from the federal government. This Wednesday, with a small group of transgender and LGBT anti-violence advocates, we briefed White House officials on strategies for addressing the problem.

Fortunately, there is much the federal government can do: count transgender people in crime and health surveys, implement the Prison Rape Elimination Act recommendations (making sure they apply to immigration detention as well), insure that federal anti-violence programs take transgender people into account, and consider trans people when addressing problems of violence against women, youth, people of color, homeless people and immigrants. We provided the administration with over twenty common sense policies we desperately need to have implemented.

This week too, NCTE released a model school district policy with our partners at the Gay, Lesbian, and Straight Education Network (GLSEN) to help schools better incorporate the increasing number of transgender students coming out in America’s schools. As a first-of-its-kind resource, we hope to better prepare schools to support trans students, end bullying and establish procedures that allow young trans people to grow up as safe, whole people..

Trans people have far too many murder victims to commemorate on this Day of Remembrance. There is some solace and hope to be had in seeing that every year, more and more good people who are not transgender are taking note of this crisis, attending Day of Remembrance events and pitching in to help end it.

Today the Secretary of Health and Human Services Kathleen Sebelius announced a plan to develop and use survey questions to collect public health information on trans people.  This is the culmination of a lot of work from a lot of people.  Why is it so important?