Federal Survey: 40% of Transgender Prisoners Are Sexually Abused Each Year

The findings are similar to previously released research, including a California study finding that of transgender women held in men’s prisons, 59% had ever been sexually assaulted by another prisoner. While BJS did not break down transgender statistics by gender or type of facility, most prisons and jails continue to house essentially all transgender women with men despite 2012 federal rules calling for individualized placements. Previously released statistics from the same surveys found that gay, lesbian, and bisexual prisoners also face very higher rates of sexual assault behind bars—though the transgender rates are the highest by far.

END_OF_DOCUMENT_TOKEN_TO_BE_REPLACED

Department of Justice Clarifies Police, Courts, Shelters, and Others Must Respect Gender Identity

This week the U.S. Department of Justice (DOJ) release long-awaited guidance on the 2013 law prohibiting discrimination based on sex, sexual orientation, and gender identity by entities funded under the Violence Against Women Act (VAWA). VAWA’s nondiscrimination protections provide broad protections, not only for LGBT survivors of domestic violence, sexual assault, and stalking, but for anyone else facing discrimination from law enforcement agencies, courts, or community groups that accept VAWA funding for any part of their operations. The guidelines clarify that refusing to accept a person’s self-identified gender when delivering services constitutes unlawful discrimination, and that in many cases segregating by gender in the first place is prohibited.

The guidance, from DOJ’s Office on Violence against Women, answers “Frequently Asked Questions” about the nondiscrimination law included in the 2013 reauthorization of VAWA, which for the first time explicitly prohibited discrimination based on sex, sexual orientation, and gender identity in any program or activity funded in whole or in part by VAWA. Critically, the guidance clarifies that all VAWA-funded services must be open to all persons regardless of gender. Sex-segregated programs are permitted only when an agency can prove the services can’t be provided any other way—in which case, fully equivalent services must be provided to people of all genders.

END_OF_DOCUMENT_TOKEN_TO_BE_REPLACED

The TransLatin@ Coalition recently released a new report titled “TransVisible: Transgender Latina Immigrants in U.S. Society,”  which is based on the Coalition’s survey of 101 transgender Latina immigrants around the country.  The report summarizes the results of the survey, highlights the challenges that trans Latina immigrants face, and makes recommendations for changes in laws, policies, programs, and attitudes.

Although 99% of survey participants said they had better opportunities in the US than in their country of origin, the survey showed that they still face horrendous levels of discrimination in the US because of their gender identity.  The statistics on their experiences in the US are bleak. Nearly 80% of respondents expressed moderate or extreme difficulty in obtaining documentation that reflected their names and gender identities. Only half reported being employed, and only nine percent stated that they were medically insured through their employment. And about 70% said they knew another transgender Latina immigrant who had been murdered.

END_OF_DOCUMENT_TOKEN_TO_BE_REPLACED

Last week, the Government Accountability Office (GAO) released a 93 page summary of their investigation into immigration detention facilities and whether they are properly reporting the sexual abuse of immigrant detainees. The report unveils the ongoing failures of immigration detention facilities in reporting and addressing instances of sexual abuse that occur far too frequently in immigration detention sites. For example, the GAO report details the experience of a transgender woman who was sexually assaulted by a male guard while in solitary confinement in a male facility. In this case, the guard admitted to the abuse and was prosecuted by federal authorities. However, the report explained that many allegations of sexual abuse by detainees around the country go unreported and unaddressed by detention staff. Shockingly, at the facilities that GAO visited during their investigation, 40% of the allegations made by detainees had not been reported to ICE headquarters as required.

Over the years, NCTE has worked to prevent the sexual assault of all people in confinement. We have especially highlighted the abuse of transgender immigrants, who are among the most vulnerable to abuse. In addition to encouraging the Department of Homeland Security to issue strong regulations that comply with the Prison Rape Elimination Act, NCTE released a report detailing trans immigrants’ struggles, and encouraged ICE to improve its monitoring of the use of solitary confinement. Although DHS has made some important steps forward, much still needs to be done to ensure that all immigrants, and especially vulnerable transgender immigrants, are free from abuse and mistreatment in detention.

END_OF_DOCUMENT_TOKEN_TO_BE_REPLACED 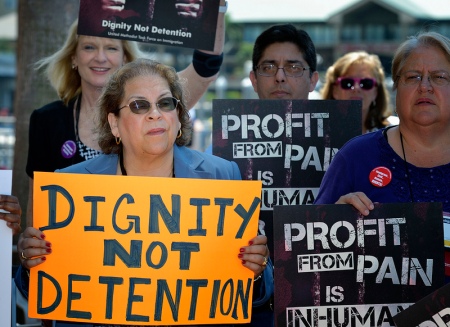 Last week, the National Center for Transgender Equality, with our partners at Just Detention International  led advocacy efforts urging Secretary Napolitano and the Department of Homeland Security (DHS) to strengthen protections against sexual abuse of LGBT people and people with intersex conditions in immigration detention. In addition to organizing over 800 individual comments and dozens of organizational comments, NCTE joined eight other national LGBT and allied groups in filing over 30 pages of public comments on the proposed regulations that address this problem, which is part of the implementation of the Prison Rape Elimination Act.

Sexual abuse of LGBT people and people with intersex conditions violates their basic human rights. The U.S. government has an obligation to provide safe and humane conditions for people in confinement. Not doing so impedes detainee’s ability to obtain lawful immigration status when eligible and to successfully adjust back into the community. Additionally, public health considerations like the widespread transmission of HIV and the growing rates of depression, anxiety and suicide ideation among immigration detainees demand swift action by the Department of Homeland Security.

END_OF_DOCUMENT_TOKEN_TO_BE_REPLACED

More than 200,000 youth and adults are sexually abused in prisons, jails and juvenile detention facilities each year, and a disproportionate number are transgender and gender nonconforming people. Hard work over several years by NCTE and other trans, LGBT and intersex advocates paid off in May with the release by the Department of Justice of final National Standards to Prevent, Detect, and Respond to Prison Rape, which have the potential to be a big part of the solution. NCTE has created a fact sheet regarding the new standards, which were called for by the Prison Rape Elimination Act of 2003 (PREA), and which facilities across the country will have to follow in order to maintain federal funding or required accreditations.

LGBT People and the Prison Rape Elimination Act highlights and explains the sections most relevant to transgender people, the broader LGBT community, and those people with intersex conditions such as: