Tonight, the White House announced executive actions that will halt deportations and provide legal status for nearly 5 million immigrants. However, the National Center for Transgender Equality expresses deep concern that the relief does not go far enough to benefit most LGBT immigrants.

“We welcome these positive steps and the much-needed relief they will provide for so many people,” said Mara Keisling, Executive Director of the National Center for Transgender Equality. “The President needed to act because Congress would not. At the same time, the action announced today will not reach most LGBT people who need it. Those for whom relief remains out of reach will continue to live in fear of dangerous detention and deportation. Though the President has been a champion of LGBT equality, he still must do more to protect LGBT immigrants.”

The limitation of relief to parents of US citizens or permanent residents, and to others who can meet strict criminal background checks, disproportionately exclude LGBT immigrants. Only about one-third of LGBT people are parents. Of these, many will be excluded because they are parents of Dreamers or other non-US-born children, or are not recognized as parents in the state where they live. LGBT immigrants are also much more likely to be excluded from relief because of a minor criminal record. More than one in four transgender undocumented immigrants has had to engage in low-level survival crimes, such as sex work, shoplifting, or turnstile jumping, at some point in their life. Categories of relief tied to work history or marriage may also exclude LGBT immigrants who have experienced job discrimination or who cannot marry where they live.

As a result, only a fraction of an estimated 267,000 undocumented LGBT immigrants will likely be eligible for relief under today’s announcement. NCTE urges the Administration to take further action to ensure LGBT immigrants are not left behind—and most urgently, to end the detention of LGBT immigrants who are at extreme risk of abuse in detention centers.

“Many LGBT immigrants have fled life-threatening persecution because of who they are and who they love, to make this country their own and contribute to its success. Once here in the U.S., they are subject to horrific conditions in immigration detention, and the constant fear of deportation to face further violence or death.” said Keisling. “Today, too many are still waiting to live lives free of fear. We will continue to work with the President and Congress to ensure everyone who contributes to this nation has a chance to achieve it.”

On Saturday August 2nd, hundreds of pro-immigrant groups from the around the country descended on the streets of Washington, DC calling for a halt to deportations of undocumented immigrants and for expansion of policies that allow undocumented or mixed status families to remain in the country together. The groups used the phrase “Not 1 More” as their slogan. More than 1,100 immigrants are separated from their families and communities each day through deportations according to the National Immigrant Law Center. 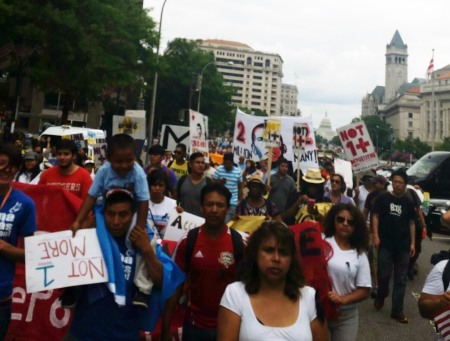 President Obama has the ability through a legal mechanism known as “administrative relief” to allow undocumented immigrants to stay based on certain circumstances. Organizers of the rally called for the Administration to expand its guidelines for administrative relief. The National Center for Transgender Equality (NCTE) supports expansion of the guidelines and hopes that an immigrant’s gender identity and/or sexual orientation, as well as the likelihood of persecution or violence upon repatriation, is included.

END_OF_DOCUMENT_TOKEN_TO_BE_REPLACED

The nation’s leading lesbian, gay, bisexual, and transgender organizations this week sent a letter to the White House and Department of Homeland Security echoing the growing call for a halt to the mass detention and deportation of immigrants.

The letter reads in part:

“Like so many others, LGBT immigrants continue to be torn from their families and communities by these deportations. LGBT immigrants, many of whom came to the US to escape life- threatening persecution for who they are, are regularly and senselessly being detained for months, or even years, in unsafe conditions. Despite new regulations pursuant to the Prison Rape Elimination Act,Immigration and Custom Enforcement (ICE) has failed to take adequate steps to protect LGBT people from abuse and inhumane isolation in detention centers, and transgender
women in particular continue to face harsh and inhumane conditions.”

Echoing recommendations made by other leading human rights organizations and members of Congress, the letter calls on the President to “take swift executive action to suspend mass immigration detention and deportations.” It argues that the billions now spent on aggressive immigration enforcement are not increasing public safety but are tearing families and communities apart and undermining trust in law enforcement. The letter requests a meeting between national LGBT organizations and Administration officials to discuss the issue.

Read the full letter below.

Last week, the Administration announced that a promised review of its immigration enforcement policies will be further delayed. Leaders in the House of Representatives continue to block any action on immigration reform.

The letter builds on the continuing work of grassroots LGBT immigration activists around the country, and was developed with input from grassroots activists including United We Dream’s Queer Undocumented Immigrant Project and Familia: Trans Queer Liberation Movement.​

Last year, NCTE published a report outlining the impact of our harsh and dysfunctional immigration system on transgender people.

The National Center for Transgender Equality (NCTE) and the Transgender Law Center (TLC) express disappointment in the final standards published today by the Department of Homeland Security (DHS) to address the severe problem of sexual abuse in immigration detention. While the final standards contain some valuable provisions, they fall short of the minimum steps needed to address the ongoing crisis of sexual abuse in immigration detention. In particular, the standards–which are, in key respects, weaker than those adopted by the Department of Justice (DOJ) in 2012 for prisons and jails–lack critical protections for transgender immigrants, who are among the most highly vulnerable to sexual abuse.

“The rules released by DHS today are not adequate to protect the safety of tens of thousands of real people who are at risk in detention every day,” said NCTE Executive Director Mara Keisling. “While NCTE will work with our allies to see that the positive steps that did make it into the DHS rules are fully implemented, far more needs to be done to reform and ultimately end mass detention.”​

Olga Tomchin, Soros Justice Fellow at the Transgender Law Center said, “It is a cruel irony that trans immigrants who flee persecution and believe they will be safe in the U.S. are then often met with state violence and further retraumatized by horrific treatment based on their trans status.”

END_OF_DOCUMENT_TOKEN_TO_BE_REPLACED

LGBT Coalition for Immigration Reform Stands in Solidarity with Fast For Families on National Day to Act, Fast and Pray

WASHINGTON, D.C.  – The nation’s leading lesbian, gay, bisexual and transgender (LGBT) organizations applauded the strength and courage of the men and women who have been fasting for more than 20 days to highlight the need for comprehensive immigration reform.

The LGBT community offered their support to the brave Fasters and several LGBT leaders fasted in solidarity, including:

“I am proud to stand in solidarity with the courageous fasters later this week, as I fast for immigration reform myself,” said Heather Cronk, co-director of GetEQUAL. “The fearlessness of the immigration fasters stands in stark contrast to the political cowardice of House GOP leadership, who continue to stand defiantly in the way of reforming our broken immigration system. We continue to look to Republican leadership in the House to not only end the fast, but also end the pain of millions of families across the country who live in fear each day because of this broken system.”

The LGBT community is committed to passing compassionate, comprehensive immigration reform that will provide a roadmap for citizenship for the 11 million undocumented men, women and children living in our country, including at least 267,000 LGBT undocumented immigrants.

END_OF_DOCUMENT_TOKEN_TO_BE_REPLACED

Last week, the Government Accountability Office (GAO) released a 93 page summary of their investigation into immigration detention facilities and whether they are properly reporting the sexual abuse of immigrant detainees. The report unveils the ongoing failures of immigration detention facilities in reporting and addressing instances of sexual abuse that occur far too frequently in immigration detention sites. For example, the GAO report details the experience of a transgender woman who was sexually assaulted by a male guard while in solitary confinement in a male facility. In this case, the guard admitted to the abuse and was prosecuted by federal authorities. However, the report explained that many allegations of sexual abuse by detainees around the country go unreported and unaddressed by detention staff. Shockingly, at the facilities that GAO visited during their investigation, 40% of the allegations made by detainees had not been reported to ICE headquarters as required.

Over the years, NCTE has worked to prevent the sexual assault of all people in confinement. We have especially highlighted the abuse of transgender immigrants, who are among the most vulnerable to abuse. In addition to encouraging the Department of Homeland Security to issue strong regulations that comply with the Prison Rape Elimination Act, NCTE released a report detailing trans immigrants’ struggles, and encouraged ICE to improve its monitoring of the use of solitary confinement. Although DHS has made some important steps forward, much still needs to be done to ensure that all immigrants, and especially vulnerable transgender immigrants, are free from abuse and mistreatment in detention.

END_OF_DOCUMENT_TOKEN_TO_BE_REPLACED

On the heels of the introduction of a new immigration proposal in the House of Representatives and ahead of Saturday’s “National Day of Dignity and Respect,” NCTE has issued a new report titled, “Out Moment for Reform: Immigration and Transgender People.”  The report identifies issues facing transgender immigrants and illuminates how the failings of the current immigration system  affect transgender immigrants and their families.

“We know that transgender [citizens] face multiples levels of discrimination in employment, housing and health security, which is made worse for undocumented transgender people.  [LULAC has] supported the inclusion of the full LGBT community in immigration reform legislation because we could not allow any member of our community to be treated differently.”

END_OF_DOCUMENT_TOKEN_TO_BE_REPLACED

Later today, House Republicans will meet to discuss the future of immigration reform. They have a choice. They can either follow the political will of the country and pass serious, comprehensive legislation that will give 11 million people – including at least 267,000 LGBT immigrants – the chance to come out of the shadows and have a clear and direct path to citizenship, or they can continue to play political games and risk the future of millions of men, women and children and the GOP.

The choice is theirs, but the responsible answer is clear.

Now is the time for the House to act. No more posturing, no more piecemeal provisions, no more extremist amendments.

As a coalition of LGBT organizations committed to compassionate, comprehensive immigration reform we celebrated two major victories last month – the passage of the bipartisan Senate immigration bill and the demise of the Defense of Marriage Act (DOMA) – but our fight is far from over. While the end of DOMA is historic and will provide an estimated 28,500 same-sex binational couples with an easier roadmap to citizenship, we are still advocating for a path forward for all 11 million undocumented immigrants, including the 267,000 LGBT immigrants.