“These findings underscore the importance of recognizing that API transgender people are a significant and too often marginalized part of both API and LGBT communities, and a community that faces substantial and sometimes unique challenges,” said Mara Keisling, Executive Director of the National Center for Transgender Equality. “And the broader racial justice analysis has too often excluded APIs. This research contributes to our long-held belief that policy makers must understand and act on the deep disparities that exist within people of color communities.”

END_OF_DOCUMENT_TOKEN_TO_BE_REPLACED

If you asked me what I would most like people to know about the National Center for Transgender Equality, I’d need to name a few things: we have a truly remarkable board and staff, we do exceptional work with almost no resources, and our federal agenda is really, really complex. I hope that the quality of our board, staff, and work shows.  However, I do sometimes think that the community doesn’t always see the breadth and complexity of the work we do.

In late 2007, when we knew that a new Presidential administration was imminent, we began a process to really dig into and understand all the federal policies that needed to be adjusted to be fairer for trans people. Most bad policies weren’t intentionally hurtful to us; they just ignored us or didn’t anticipate us.

Late in 2008, we released a list of policies we wanted changed and we set about changing them. Since then, we’ve had some very important successes like working with the State Department to update their passport gender marker rules and working with the Social Security Administration to get them to stop sending gender no-match letters that effectively out trans people to employers.  We’ve also had dozens of other successes, big and small.

END_OF_DOCUMENT_TOKEN_TO_BE_REPLACED 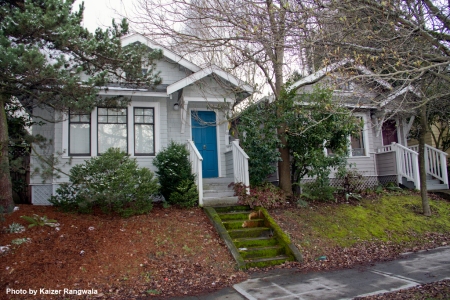 The new rule, having completed a mandatory 30-day waiting period, updates current federal housing and housing-related programs prohibiting owners and operators of federally-funded or federally-insured housing, as well as lenders offering federally-insured mortgages from discriminating based on gender identity or sexual orientation; and clarifying the definition of “family” to ensure that LGBT families are not excluded from HUD programs.

END_OF_DOCUMENT_TOKEN_TO_BE_REPLACED

Today, at the 24th National Conference on LGBT Equality: Creating Change, Housing and Urban Development (HUD) Secretary Shaun Donovan announced that they will issue a historic new rule strengthening housing discrimination protections for transgender people. The regulations will be published next week, and go into effect 30 days from then.

“I am proud to announce a new Equal Access to Housing Rule that says clearly and unequivocally that LGBT individuals and couples have the right to live where they choose […] If you are denying HUD housing to people on the basis of sexual orientation or gender identity, actual or perceived, you’re discriminating, you’re breaking the law, and you will be held accountable. That’s what equal access means, and that’s what this rule is going to do.”

The new rule makes several urgently needed changes to current federal housing and housing-related programs including: prohibiting owners and operators of federally-funded or federally-insured housing, as well as lenders offering federally-insured mortgages from discriminating based on gender identity or sexual orientation;and clarifying the definition of “family” to ensure that LGBT families are not excluded from HUD programs.

According to Harper Jean Tobin, NCTE Policy Counsel, “this is a major and urgently needed advancement in basic protections for transgender people. NCTE is calling on other federal departments to follow HUD’s common-sense approach and use existing legal authority to prohibit discrimination against LGBT people in the programs they fund and administer. We applaud Secretary Donovan and the Obama Administration for this much needed relief for transgender people.”

Mara Keisling added “We are very pleased that, just as he said at NCTE’s Awards Ceremony in November, HUD has clearly listened to our concerns with earlier drafts of the regulations and made them even stronger.”

In announcing the draft rules early last year, HUD cited The National Transgender Discrimination Survey conducted by NCTE and the National Gay and Lesbian Task Force, showing that 19% of transgender and gender non-conforming people had been refused a home or apartment and 11% had been evicted because of their gender identity or expression. The study also showed that 19% of transgender people have been homeless at some point in their lives, and 29% of those had been turned away from homeless shelters and a majority were harassed when they could get in to a shelter.

Even given the unconscionable levels of discrimination against all transgender people in the United States, people of color including Latinos/as experienced heightened levels of discrimination and had worse outcomes than the sample overall. Racism and anti-immigrant bias played a role in these outcomes, with non-citizen Latino/a respondents often reporting even worse experiences.

NCTE Executive Director Mara Keisling said, “This report paints a devastating picture of the treatment of our Latino and Latina transgender brothers and sisters who, on a daily basis, endure extreme poverty, unemployment and discrimination just to live out their full lives.”

Some key findings include:

“We have long known that race and citizenship status have a very real impact on transgender people,” said Mara Keisling, “And for the first time, we can identify in specific terms, what these painful realities are.” Other key findings include:

“This study shows how devastating multiple discrimination is for Latino and Latina transgender people,” said LULAC Executive Director Brent Wilkes. “We are committed to ensuring that all people, regardless of race, sexual orientation and gender identity are respected and treated fairly.” He called on other Latino groups to speak out and address anti-trans discrimination harassment and violence, saying “We will not stand idly by in a society where equality is not within everyone’s reach.”

Rea Carey, executive director of the National Gay and Lesbian Task Force said, “The numbers make clear the way that racism, anti-immigrant and anti-transgender bias all work together, often with devastating results in the lives of Latino and Latina transgender people. We must ensure that we continue to work toward an LGBT movement that prioritizes immigration, racial and economic justice.”

NCTE has long worked to support trans immigrants, particularly advocating to ensure that the forthcoming Prison Rape Elimination Act (PREA) regulations apply to immigration detention centers. “Documented or not,” Keisling said, “these numbers tell us that the LGBT movement must have an immigrant-inclusive agenda.”

Read the full report in English and in Spanish.

In our largest-yet crowd of 300 transgender activists, allies, and supporters, NCTE celebrated our eighth anniversary and honored two outstanding activists, Donna Cartwright and Brian Bond. Founding NCTE board member, Donna Cartwright, kicked off the event after introductions by Mara Keisling and Peggy Shorey, executive director of Pride at Work.

“The launch of NCTE in 2003 gave the trans community its own strong, independent voice in national policy discussions,” Cartwright said, “NCTE made our community a significant factor in the national LGBT movement for the first time. I’m proud of the role I played in bringing that about.”

Cartwright accepted the Julie Johnson Lifetime Achievement Award, an honor named after a longtime transgender activist, philanthropist and visionary. In homage to Julie Johnson and other transgender trailblazers, Cartwright said, “To the living, as well as to Julie Johnson, Sylvia Rivera, Louis Sullivan and many other pioneers who are no longer with us, we owe our commitment to continue the struggle until trans people no longer face crippling prejudice and discrimination, until all others who suffer from injustice and oppression win justice, until the rough places are made plain and the crooked places made straight.”

Brian Bond, former Deputy Director of the White House Office of Public Engagement, spoke next, thanking the Obama administration after laughing that “Mara said I couldn’t be political.” He went on to add: “Beyond the policy work, as someone from Joplin, Missouri, I can’t help but think that every time the President says the words ‘transgender’ or ‘gender identity’ that he is lifting up some young kid who feels alone and isolated.”

Shaun Donovan, secretary of the U.S. Department of Housing and Urban Development and the night’s keynote speaker and the highest ranking government official to address a transgender audience, spoke passionately, saying, “I’m proud to discuss the historic progress HUD has made in fighting for the rights of transgender people. And I’m even prouder to do it on behalf of the first Administration that has viewed the fight for equality on behalf of the transgender community not as an issue, but as a priority.”

Secretary Donovan said, “It’s estimated that 1 in 5 transgender Americans have been refused a home or apartment – that more than 1 in 10 have been evicted because of their gender identity or expression. Allowing this to happen is wrong – and more importantly, it’s not who we are as Americans.”

Secretary Donovan went on to explain the new regulations that HUD has proposed, which would help house and protect people of any gender identity or sexual orientation with a firm “don’t ask” rule for HUD owners and operators. LGBT people would also be clearly included in HUD’s definition of family.

“Over the last 30 months, we have worked to ensure that our housing programs are open not to some, not to most – but to all.”

Yesterday, with our friends at the Task Force and the National Black Justice Coalition, we released  new analysis of Black transgender respondents in the National Transgender Discrimination Survey. The analysis is based on the experiences of 381 respondents who are Black or Black multiracial, and some of the results are startling:

“This report confirms what we’ve long known to be true: being transgender and Black in the United States presents unique challenges on the path to full equality. This problem is deeply important to me and to NCTE where every day we hear from transgender people of color who survive in the face of racism and transphobia. This report should be a lesson to all of us that a world with transgender equality is a world with racial equality.”

Watch the video after the jump.

END_OF_DOCUMENT_TOKEN_TO_BE_REPLACED

From North Carolina to New York City, thousands of people have already evacuated their homes to escape Hurricane Irene’s path. Among them are transgender people who, like others, don’t have anywhere else to turn to except for evacuation shelters.

NCTE has also created a Hurricane Preparedness Kit for transgender individuals who are displaced by storms. This resource includes information about what to do when preparing for a storm, and what to bring if you are evacuated.

If you are facing harassment or discrimination in emergency shelters and other evacuation programs because of your transgender status, please call the Lambda Legal Toll-Free National Help Desk at 866-542-8336. To file a discrimination complaint with the Federal Emergency Management Agency (FEMA) Office of Equal Rights, call 202-646-3535.