The National Center for Transgender Equality (NCTE) extend our congratulations to the cast and crew of Transparent, and to its creator, Jill Soloway. “Transparent captures the spirit of the life and struggle of one particular kind of transgender person,” said NCTE’s Alexandra Scott, and in so doing, they’ve provided a window into understanding our whole community. Their Golden Globes are well earned honors.” 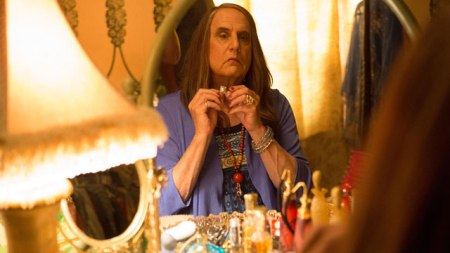 END_OF_DOCUMENT_TOKEN_TO_BE_REPLACED

This is a guest post from Jennifer Levi, the book editor and Transgender Rights Project Director at Gay & Lesbian Advocates & Defenders.

I am pretty excited about the recent release of a book co-edited by myself and Liz Monnin-Browder, Transgender Family Law: A Guide to Effective Advocacy. The book pulls together a huge amount of resources with which few attorneys would be familiar.  I urge everyone in the community to pick up a copy and share it with friends or, for anyone facing a family law issue, with your attorney.

We wrote the book because until we can do more to educate lawyers and judges about the reality of transgender people’s lives, transgender people will continue to face serious discrimination and bias at our most vulnerable times. Far too many people have lost relationships with their children, been forced into to unfair property settlements, or had intimate relationships of longstanding duration ignored, all because nobody was prepared to legally represent them and because courts simply mirrored widespread social bias rather than challenged it.  Transgender Family Law is more than just a legal resource, it is a tool for social change.

Purchase a copy of the book here.

On Tuesday, May 1, 2012, at 8:00 PM EST, Nat Geo TV will air “American Transgender,” an hour-long feature looking at the lives of three transgender people and their families. From the NGTV Blog post:

American Transgender takes us firsthand into the daily lives of three individuals—Clair, Jim, and Eli—who each identify with a different gender from the one in which they were born and raised. We witness their struggles and triumphs, and experience their hopes and fears.  How do they manage at work, build careers, maintain friendships, and nurture lasting, intimate partnerships? Each of the characters in the film tells their story in their own words as we follow them through life’s daily battles and victories, both large and small.

One of the people they follow, Eli Strong, is a friend of NCTE. Talking about his experience in making the documentary, Strong said, “I was able to have conversations with my family that I’d never been able to have. I was able to show how ‘normal’ my life is. It also gave me the opportunity to give voice to some of my own struggles, as well as some of those I’ve heard from my trans peers.”

Watch a preview of the special here.

Each of us has our own stories. They’re complicated, and sometimes hard to share. But sharing our stories is a powerful way to help others understand who we are and influence public policy. This kind of education has long been missing in the movement for transgender equality. And that’s why NCTE is encouraging trans people to participate in “I AM: Trans People Speak,” a multi-media campaign seeking to educate LGB people and the public about trans people, their family, and allies.

The initiative, started by the Massachusetts Transgender Political Coalition (MTPC), is gaining national momentum with Gay and Lesbian Alliance Against Defamation (GLAAD) now on board as a campaign sponsor. GLAAD has helped to bring in star power with new supporters like Kit Yan, Laverne Cox, and Isis King.

Some NCTE folks sat down to tell their own stories. Marisa Richmond, NCTE Board Secretary and President of the Tennessee Transgender Political Coalition, talks about how the murder of her close friend, Christian Page, inspired her to do political work:

END_OF_DOCUMENT_TOKEN_TO_BE_REPLACED

“Transgender people, their partners and their families are too often caught in the middle of these kinds of laws. And today, the Ninth Circuit Court joined our community in recognizing Proposition 8 for what it is–a discriminatory attack on decency and common sense, motivated by prejudice and discrimination. Today’s ruling is about ensuring that our laws are clean of prejudice, and truly protects us all. Regardless of the make-up of our relationships, the ruling once again shows that justice and equality are advancing.”

We congratulate the plaintiffs, their counsel, and all Californians on this important victory.

NCTE on Advocate.com: 14 Reasons That Made 2011 Great for Trans People

The Advocate.com has published an op-ed from NCTE Executive Director Mara Keisling on 14 cultural and political advancements that made 2011 great for trans people:

For eight years, I’ve been incredibly fortunate to be doing trans social justice work. And as I look back at what has been accomplished, I can say that 2011 is especially marked by victory after victory. Most Americans now know a little bit more about the struggle trans people face. Every day people are becoming stronger trans allies. From the trans actors we are finally seeing on movie and television screens, to local nondiscrimination laws, and to the global call for LGBT rights, there is real change in nearly every facet of our lives.

More Election Results: A Loss in Maine and a Win in Washington

Let’s be clear: equality under the law is not optional in a democracy—it is the fundamental basis of our way of living. Voters yesterday were asked to support equality or to steal basic rights from their fellow citizens; it is immoral to have a majority vote on minority rights. Yesterday, the movement for equal rights for same-sex partners took one step forward and one step back as results came in for ballot measures in Maine and Washington State.

In Maine yesterday, voters acted to repeal the state legislature’s action in May legalizing same sex marriage. This is the first time that voters have overturned the decision of a state legislature that had previously approved marriage equality. We are saddened that couples in Maine are being denied the right to join together in marriage and that the campaign of misinformation spread by those who oppose marriage rights won the day. However, we applaud the Protect Maine Equality campaign for their groundbreaking work exposing the scare tactics and their hard work for marriage equality.

In Washington, voters approved Referendum 71, upholding a domestic partnership law in the state. Over the past few years, the legislature has passed important bills advancing LGBT rights and the voters have now shown their approval of that work. The campaign was also an opportunity to talk with people about the need for equal benefits and protections for all couples in the state. Congratulations to the Approve Referendum 71 campaign, who worked with a broad coalition of more than 500 organizational partners, including businesses, faith groups, communities of color, labor, seniors groups and more to win this effort.

More and more, Americans are affirming that we have the right to protect our relationships with the people we love and to earn a living without fear of being fired for reasons that have nothing to do with how we do our jobs. In the voting booth yesterday, we won two out of three of these ballot measures. While the movement for equality isn’t always a smooth one, we are making progress for justice and fairness for LGBT people … and indeed for all of us.