The new announcement makes D.C. healthcare coverage the most comprehensive plans for transgender Americans in the United States, a direct result of concerted advocacy from local activists, the National Center for Transgender Equality, or NCTE, and the Center for American Progress and other allies.

“This policy will make D.C.’s healthcare programs and insurance coverage the most comprehensive in the country for the full scope of health care that transgender people need throughout their lives,” said Andrew Cray, Policy Analyst at CAP’s LGBT Research and Communications Project. “But more importantly, this announcement tells transgender people in the District that their health matters.” 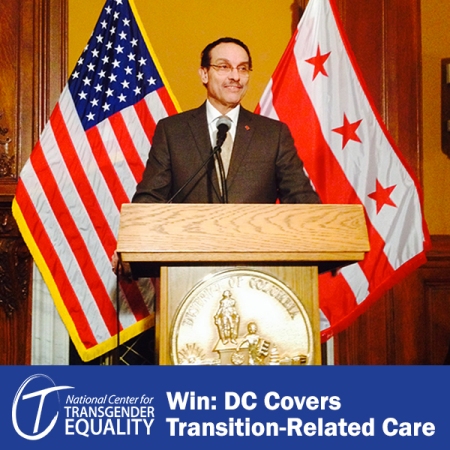 In a press conference today, Mayor Gray-along with representatives from DISB, the Department of Health Care Finance, which regulates D.C. Medicaid, and the Department of Human Resources, which regulates D.C. government employee plans-announced that they will ensure that D.C. Medicaid and government employee plans will conform to DISB’s explanation of D.C. law.

“The insurance bulletin means so much to transgender people,” said Mara Keisling, NCTE’s Executive Director. “It means healthcare is affordable and means we can access that care without delay or limitation. Here in the nation’s capital, transgender people won’t be forced to choose between paying the bills or paying for healthcare.”

Bowen added, “Critically important is that as more states follow the District’s lead, we’ll be better able to educate the medical community about respectfully and comprehensively meeting our healthcare needs. And that sets us up for more wins like this in other states.”

“Ensuring the health of transgender people is a key component of achieving LGBT equality, and fair insurance coverage is a priority for advocates across the country,” said Laura Durso, Director of CAP’s LGBT Research and Communications Project. “We thank Mayor Gray and his administration for working with the transgender community to secure access to the health care that transgender people need to live full, healthy lives.”

This entry was posted on Thursday, February 27th, 2014 at 11:00 am and is filed under Health & HIV. You can follow any responses to this entry through the RSS 2.0 feed. You can leave a response, or trackback from your own site.