Trans Health Care Protections at Risk with the Supreme Court

Yesterday kicked off National LGBT Health Awareness Week, a time when, as Secretary of Health and Human Services Kathleen Sebelius said in a statement, we “highlight the progress our country is making to address the unique health needs of lesbian, gay, bisexual, and transgender (LGBT) Americans, especially through the implementation of the health care law, the Affordable Care Act.” 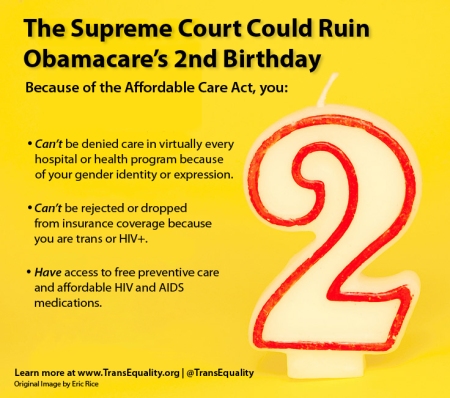 But recently, instead of highlighting progress, we are being forced to defend victories. For instance, the attack on women’s reproductive health and the constant war on “Obamacare” symbolize for me how extremists are taking distinctly anti-equality positions. And today, even more is at risk as the U.S. Supreme Court hears arguments related to the constitutionality of the Affordable Care Act.

I don’t think very many people know what the Affordable Care Act actually does, and we’ve tried to highlight that in a couple of places. The arguments discussed at Supreme Court today look at whether the government can require people to buy health insurance, a provision known as the individual mandate. Under the law, everybody can get insurance, regardless of pre-existing conditions. In fact, the law requires that everybody participate in the pot to help cover the cost of the whole pot.

It is unclear whether losing the individual mandate in the Supreme Court would put other parts of the law at risk including the protections transgender people have gained in health insurance programs and other aspects that address the health needs of trans people.

A few years ago, it would have been difficult to imagine that the legitimacy, let alone the constitutionality, of legislation like this would be called into question. The major components of the law, including the individual mandate, have been widely advocated by leaders across the political spectrum for years. I am hoping that the Court will not take part in the partisan food fight on an issue that, not too long ago, had bi-partisan support.

Repealing something that Congress does, assuming that it is constitutional, is the essence of being an activist court. The Court’s aggressively activist decisions like Citizens United make me nervous about whether historical precedent and constitutional law will always carry the day.

I am a big believer in the American governmental system, though. None of us gets our way all the time in politics, and here at NCTE, we aren’t accustomed to sitting around while trans policy is threatened. And that is my biggest frustration of all: that advocating for one of the most crucial protections for trans people is out of our control.

This entry was posted on Tuesday, March 27th, 2012 at 5:25 pm and is filed under Health & HIV. You can follow any responses to this entry through the RSS 2.0 feed. You can leave a response, or trackback from your own site.